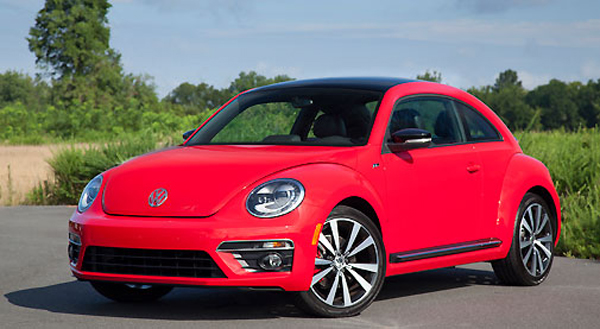 The 2014 Volkswagen Beetle is immediately recognizable as a descendant of the hippie-inspired 1960s Bug. The shiny standard wheels are even modeled after the Bug’s wheels from decades ago. Under the surface, though, the Beetle shares most of its parts with workaday Volkswagens such as the Golf and Jetta. Since it is sold as both a coupe and a convertible, the Beetle decides to change up its Powertrain lineup in 2014. The 2014 Beetle’s interior uses some nice materials, though the Golf is still the winner here. At least the dashboard can be dressed up with body-color inserts, which is necessary, to compete against MINI and Fiat. VW is proud of the R-Line’s standard Kaeferfach glove box, which is a heritage feature with an upward-opening door. The R-Line also has three secondary gauges atop the dashboard.

The Beetle was redesigned two years ago for both male and female buyers. The New Beetle met almost universal acclaim for its design when introduced but was not a big success. To attract more male buyers, its look is now more masculine, especially with the lower, flatter roofline and much upright windshield. It’s modern, but not in a trendy way. This shape should hold up over the years.

Beetle started the 2014 model year with a 2.5-liter five-cylinder in the base model, but Volkswagen replaced this engine with a new 1.8-liter turbocharged four-cylinder. The 2.5-liter five-cylinder rated 170 horsepower and up to 22 mpg city and 31 mpg highway; VW rates the new 1.8-liter turbo at 170 horsepower as well. The new turbo four-cylinder boosts gas mileage by 16 percent, however, for the best mileage, there’s the Beetle TDI Clean Diesel, scoring 28 and 41 mpg city/highway. The 2014 Beetle R-Line offers 210 horsepower from a 2.0-liter turbocharged four-cylinder engine. Most Beetles offered with a choice of five- or six-speed manual or six-speed automatic or dual-clutch automatic transmissions.
Another 2014 Beetle GSR has limited sales to 3,500 GSRs in total, each having a unique interior and exterior color theme and special equipment. It uses the same Powertrain as the Beetle R-Line.

The Beetle is a fantasy. It gives most of the Golf’s fundamental goodness and it packages those qualities in a uniquely eye-catching wrapper, particularly if Convertible models are chosen. Furthermore, the beetle is a nice and impressive choice for female.

Important Features of an Off-Road Vehicle