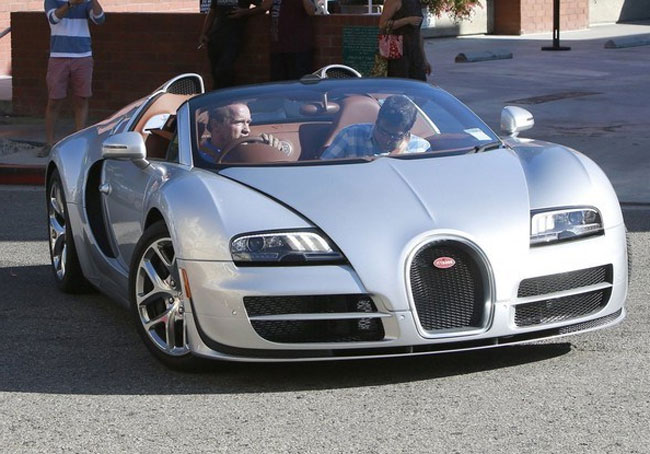 Former Governor of California and Hollywood Super Star, Arnold Schwarzenegger has recently been seen driving a silver 2015 Bugatti Veyron Grand Sport Vitesse, while his custom 1977 Mercedes Benz Uni-mog is up for sale in Germany. It remains unclear whether the movie star owns this Bugatti or not, but he sure did seem comfortable in it. The 2015 Bugatti Veyron Grand Sport Vitesse seems a good fit for Arnold, who has a repute for owning lustrous high-end cars. It is one of the fastest vehicles in the world and is a true manifestation of the French automaker’s expertise in the art of car making. This special edition Veyron debuted last month at the Pebble Beach Concours d’Elegance. The Grand Sport Vitesse has a powerful 8.0 liter W16 turbocharged engine delivering 1200 hp and 1100 lb/ft of torque. This vicious engine enables it to accelerate from 0-60 mph in a mere 2.6 seconds and hit a top speed of 233 mph. Chinese racing driver, Anthony Liu, achieved a top speed of 254.4 mph in a roofless Bugatti Veyron Grand Sport making it the world’s fastest convertible.

We sure do look forward to sighting these two celebrities, Arnold and Veyron Grand Sport, together again.

What Is Whiplash And How Can You Avoid It?