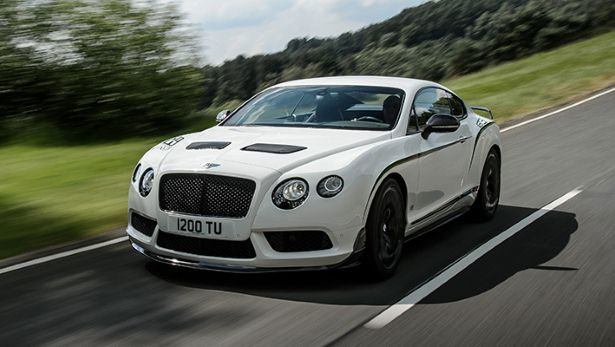 The Continental GT3-R will be heading to Pebble Beach Concours d’Elegance this weekend to be shown off by Bentley before heading to showrooms. The steep price tag of $337,000 is even higher than the Bentley Mulsanne flagship’s starting price. Some of it can be attributed to the Bentley Continental GT3-R’s status as the fastest accelerating car, going from 0-60 mph in just 3.6 seconds, the best company has ever launched.

The powerful car will be sporting a twin-turbocharged 4.0L V8 engine, found also in their Continental GT V8 lineup, but here it will deliver an improved 572 HP and 518 lb-ft of torque. The car weight has been reduced by around a 100 kg and that combined with an 8-speed transmission with shorter gearing enable it to accelerate faster.

All the GT3-Rs will come in a glacier white exterior with two prominent power lines on the side profile of the car in 2-tone green graphics. Additionally, the GT3-R exterior will also have a carbon-fiber finish with black gloss highlights and lightweight 21 inch alloy wheels. The orders for the GT3-R are open, but the car itself will not be available until Q1 2015. Those looking to buy the expensive sports car should be aware of the limited production of only 300 units. The United States alone will have just under 100 units offered to the public as revealed by Bentley. The rest of the world will have to scramble to buy the remaining units before they are all snatched up.