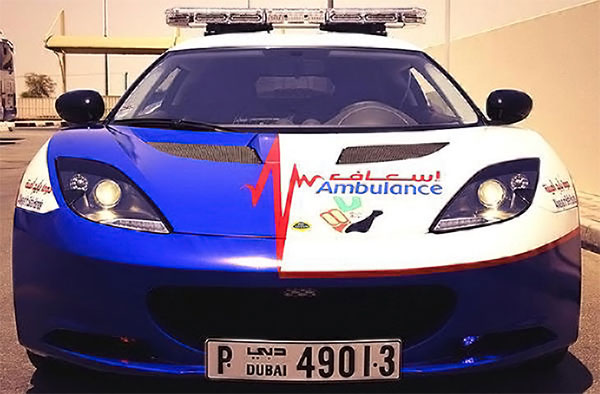 Sports cars today are not just meant for racers, but also for public servants, at least in Dubai. In terms of speed, the public servants are way ahead of the rest and they Emirati cops have speedier cars than anyone else in the world. Now Emirati paramedics have added two cars to their list, Lotus Evora and Ford Mustang that can allow them to reach across the city without wasting any second.

According to the reports from The National, Emirati paramedics will now use Lotus Evora and has been named First Responder. The vehicle was first shown to the public at the Gitex Technology Week at the Dubai World Trade Center. The new sports car is designed to transport patient anywhere and is equipped with all the necessary standard ambulance emergency equipment and machines. It has space for two occupants and mobile data terminal to relay patient data and signs to the hospital. The vehicle also comes loaded with responder bag, suction unit, foam splints for fractures, cardiac defibrillators and oxygen bag. This new sporty ambulance will reduce the respond time from eight minutes to less than four minutes. The authorities have also hired special sports car drivers to ensure better safety and quick response time.

The Ultimate Guide To Getting Low Car Insurance