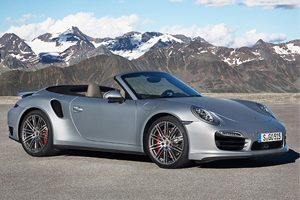 Porsche announced two new more powerful and efficient models to the lineup of 911, a 911 Turbo Cabriolet and a 911 Turbo S Cabriolet both are the open top versions of the iconic 911. This year the 911 model completes the countdown of some 50 years of its debut and the 40 years of the 911 turbo, the great German brand announced an all new open top versions of the 911 Turbo to deliver greater and conventional driving pleasure, efficiency and thrilling performance with the fun and enthusiasm of an open car. On 20th November 2013, both the new open top 911 Turbo Cabriolet and 911 Turbo S Cabriolet at the Los Angeles Auto Show.

Both the models are powered by a 3.8 liter turbocharged six cylinder engine produces 520 bhp in the 911 Turbo Cabriolet and 560 bhp in the turbo S model. Both the cars are almost same in efficiency, power and performance standards and can accelerate from 0-62 mph in 3.5 seconds and 3.2 seconds respectively. The models have a top speed up to 318 km/h. These models are able to deliver about 15% more efficient with 30 bhp more power and 0.2 seconds quicker. For greater driving dynamics, the Porsche offered active rear axle steering plus active aerodynamics and is mated by a standard PDK dual clutch transmission. These cars are surprisingly efficient to deliver aerodynamic performance on racetracks as well as on roads for everyday use and so the driver can select the optimum driving dynamic at a single touch of a button. The new 911 Turbo Cabriolet open top models are expected to go on sale in December this year and the 911 Turbo Cabriolet gets a price tag of EUR 174,431 and the Turbo S at EUR 207,989 in Germany.

Welcome The Most Aerodynamic And Fuel-Efficient Car -Volkswagen Xl1