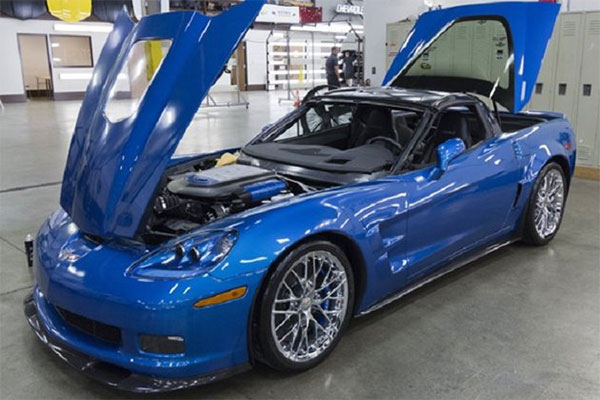 Corvette remains one of the popular brands in the auto market, but it is hard to believe that the Corvette ZR1 Blue Devil was among the few cars that fell into the sinkhole and now has been restored to its original shape and performance. The Blue Devil was just among the two cars that was used to introduce the new ZR1 back in 2008 and was on loan from Chevrolet when the accident happened and the car fell into the sinkhole. It was only last year that the sinkhole beneath the National Corvette Museum was opened up and Chevrolet team found the car in it.

Now, the team at Chevrolet has restored the vehicle back to its former glory. After recovering it from the sinkhole the team examined the damage and they found that the car had undergone pretty extensive damage. There were cracks and damages to carbon fiber ground effects, passenger side rocker panel, doors were cracked and passenger headlamp assembly was broken as well. It took around six weeks for the repair team to put it up all together and built it up. Chevrolet has now announced that they will put up this car at this year’s SEMA Show and then will remain on display at the National Corvette Museum.

Hyundai Surprises Visitors with Bisimoto Sonata at the SEMA Show

Can you get Cheaper Insurance as a Student Driver?