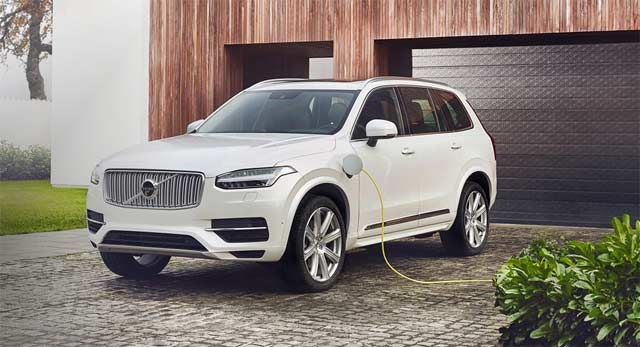 Experience the joy of plug-in fusion SUV on the Indian road. The joy comes with class, elegance but having a gigantic look of Volvo XC90 T8. Scheduled to launch on September 14 this year Volvo will introduce the Plug-in Hybrid variant of the XC90. As a first mover advantage this will set a standard for many more to come. Volvo XC90 is being offered in two trims. They are Momentum and Inscription. The Hybrid variant will only be available in the top-end Excellence grade and will be loaded with lots of tech features.

The car comes with 4-zone climate control system, power adjustable driver seats, the seats are done with Nappa leather, an adaptive display with 12.3 inch instrument cluster, cruise control, rear park assist with camera and a high end audio system. These are few of the features which gives you comfort and luxury in this Plug-in Hybrid variant.

In the market, the XC90 is available in diesel model. However the Hybrid version will be having a 2.0-litre 4-cylinder petrol engine that is both turbo and super charged. The engine of Plug-in Hybrid is paired with an eight-speed autobox to deliver an output of 95bhp and 640Nm. XC90 is an all-wheel drive vehicle, where 86hp serves to power the rear wheels. According to Volvo, this Plug-in Hybrid variant should cover 40km on electric power only.

Now, here is what it worth! The Volvo XC90-T8 Plug-in Hybrid will be on Completely Built Up route. Since the manufacturing would be in abroad one should not expect it to be benefitted from the government’s FAME scheme and hence it would be very costly. It is expected that cost would cross a crore. Awaiting for the arrival of the beast at different showrooms in the country on 14th September, 2016.

A class of its own. Introducing the first ever full size SUV from Skoda: Kodiaq